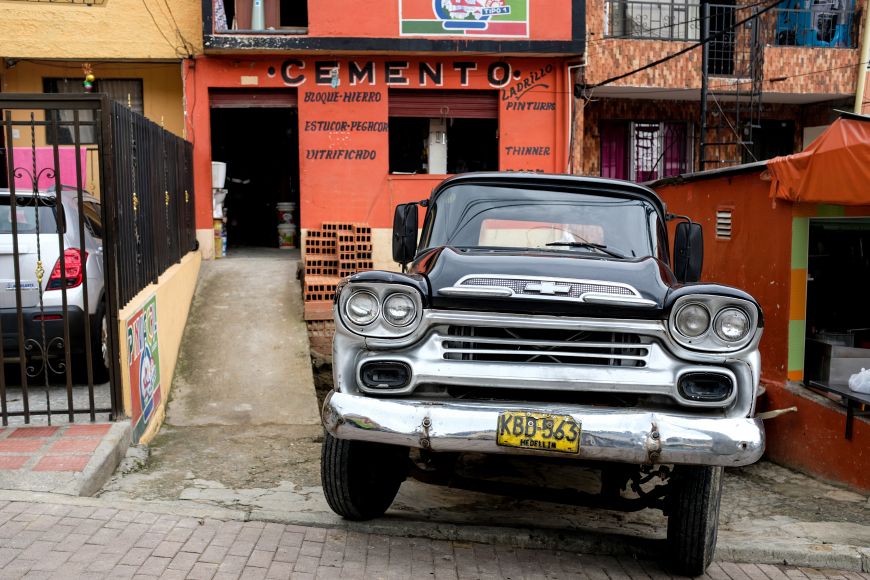 It’s taken me 17 years to get to Colombia. And that’s because, like most British people, I used to associate it with drugs and violence. So when, 17 years ago, my then boyfriend & 1 spent a year travelling in South America, the only country I wouldn’t go to was Colombia.

For all this time my now husband has wanted to go to Colombia. With a significant birthday looming (plus the fact so many friends have now safely been) I finally said yes.

We just spent two weeks travelling around Colombia with its large ethnic mix and psychedelic colours. We arrived in the city of Medellin, (formerly home to infamous drug Baron Pablo Escobar and now one of the funkiest cities in the country) through the coffee region further south, (Solento, Filandia) full of cowboys and hikers; on to Cartagena, a pretty heritage site on the coast with fabulous salsa bars; Finishing in a tiny Carbibean-flavoured island called Providencia in the north.

We flew everywhere in planes varying in size – the smallest being an 18-seater. Most flights cost about £50 and saved taking rather hairy bus rides.

We had a little bit of everything In Medillin : from recent history & culture from our guide Vicente taking us through Barrio (neighbourhood) Moravia, explaining how it’s evolved from the shadows of the ‘mountain of rubbish’ slums, where thousands of country folk fled during the troubles, into a thriving neighbourhood with its own football club. Or taking the cable car up to Santo Domingo for a birds eye view of the patchwork roofs below; Climbing the elevator to Commune 13 to see the remarkable transformation of this former no-go zone where teenagers now perform street dance at the top of the stairs while graffiti artists display their talents on any available surface; We moved around easily on The Metro, which is, our guide points out, immaculate. No one litters these air-conditioned over-ground trains because of what they represent : hope and optimism.

Then onto Solento in the coffee region where we took a muddy 5 hour hike up to a house filled with humming birds and played pool in a hall that has stayed the same for fifty years. Then a bit of r and r in Caragena where we ate incredible ceviche, drank rooftop cocktails and tried to pick up a bit of salsa (the government lays on free salsa lessons like aerobics in public spaces which anyone can attend!)

And finally onto a bit of beach and snorkelling in Providencia, a tiny unspoilt island off the North Coast. (NB Fly, don’t take the catamaran from San Andres unless you like throwing up) We swam with turtles and worked on our tans whilst chatting to locals in creole – this used to be a British colony. Our taxi driver was one of 34 children. Many of the islanders are Rastafarians and the pace is relaxed.

Colombia still has issues. Just the day we got home three bombs exploded at police stations in the north including the city of Barrangquilla. Several police officers were killed. According to the Foreign office advice on Colombia, ‘a temporary ceasefire between the Colombia government and the national liberation army (ELN) ended on 9th January 2018. The ELN has since renewed its attacks …and further attacks could take place.’

They have an expression in Colombia, not to ‘dando papaya’ which which in slang means don’t give a thief the chance to steal. So we wore backpacks zipped up or on our fronts and we didn’t have any issues. The foreign office agrees : ‘Despite the high levels of crime, most visits to Colombia are trouble-free.’ 30th January 2018

In fact, in my experience, For all it’s tough rap, you are more likely to get a cuddle with a chihuahua than experience a real life episode of Narcos in current day Colombia. I didn’t see any drugs (though there was a big cocaine haul uncovered while we were there) but I saw hundreds of pampered pooches. Poodles with ribbons in their hair; French bulldogs in exotic coats and English bulldogs strutting their stuff. Furthermore, furry pets have access to all areas including on planes, on motorbikes, and in handbags.